So I'm the oldest, most living-in-a-box person around because this conversation just happened.

Nobody in my family reads anymore. Just kidding! We all read but then we all depend on my dad to blog because we keep forgetting. MAYBE over the Christmas break one of us will get one or two in? Until then, click here and browse around for some good reading inspiration!

It hasn't felt very Christmas-y this year, which I'm going to go ahead and blame on the awful, warm weather. CB disagrees that it's "awful" when it's 60 or 70 degrees in December in the northeast, but I think it's just plain wrong. I want snow, dammit! I wait all year for this!

However, I've been trying to get myself into the holiday spirit by listening to Christmas tunes. Which lead me to start making a list in my head of the best Christmas tunes ever.

"Bells bells bells bells!" (is what I call it. Apparently it's called "Carol of the Bells.")
"Chestnuts Roasting on an Open Fire (The Christmas Song)"
"Little Drummer Boy"
"All I Want For Christmas (Is You)"
"Holly Jolly Christmas"

Now I'm in the spirit! Thanks, lists!

It’s possible that I’m writing this while listening to the New Kids on the Block Christmas channel on Pandora. Don’t judge and try not to dance during “Funky Funky Christmas.” Can’t happen (yes it can, according to CB, but he lies).

Anyway, I’m about to be the Grinch, you guys, hunker down, there’s some Scrooge’ing going on in my brain and I can’t stop it. Nor do I really want to? Because I’m totally right and my judgment is warranted, is what I tell myself while trying to be merry.

Ok, so I’m a fan of animals. Dogs, cats, adorable bunnies – I’m good with all of them. I had a beloved cat for 13 years as and we had a dog and cats growing up. However, we’ve gone ‘round the bend and need to stop. It’s madness, you guys.

You see, I was at the gym today, listening to a conversation between two women discussing their upcoming holiday travel plans. It started out normal enough until one of the women began talking about what a pain it’s turning out to be to take her dog on holiday with them.

First, I object to this on principle: unless you’re moving and/or impaired in some way and require the assistance of a canine, don’t bring your dog on vacation. Nobody wants your dog on the plane, I promise. Listen, nobody wants my baby on the plane and she’s incredibly cute, wears festive hats, and has dimples. Also, nobody at your final destination wants your dog there, either. I promise. However, my overall objection to this is because the woman proved herself to be an insane person and I was disturbed that the other woman continued to discuss this with her as if it was at all normal. To the point that I started making counter-arguments in my head at her even though she wasn’t talking to me and also maybe I shouldn’t have been eavesdropping?

Whatever. The following things actually came out of the dog-owners mouth and I full-on stared at her while they did. I didn’t even try to hide the fact that I was judging her with my eyes and aggressively arguing with her in my brain.

·         She could stay with my brother, who lives on a few acres of land and they have two dogs themselves. But they just let their dogs outside to run around and my dog needs to be walked on a leash or she won’t go to the bathroom. She’s an indoor dog.

·         OH MY GOD. There’s no such thing as an indoor dog. Good grief I dislike this lady a ton. She’s describing a somewhat awful experience of dragging her “indoor dog” onto a plane full of no other dogs so that she can have her in a hotel room at her final destination because the dog will miss her otherwise. OR, the dog could play with other dogs and run around like dogs love doing because GENETICS and not be put on a leash by her insane owner?

·         You shouldn’t. You’re just starting to think that? The fact that an actual sentence like this came out of your mouth tells me more about you than anything else I’ll ever hear from you ever while eavesdropping in the locker room.

See? I’m totally Scrooge-y! Why am I so mean? These are ACTUAL thoughts I had while she was complaining about her dog struggles! It’s almost Christmas and I was all like “you are a ridiculous person.” What happened to having a charitable heart? My heart isn’t even in the same room with everyone else’s charitable ones! Oh no, you guys! 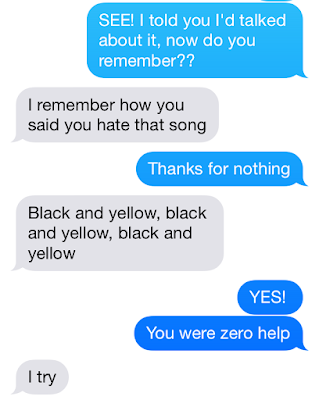 I May Be Living in a Black Hole

Ok, so it's been a weird week, you guys. First, I got an alert from our bank the other day that my debit card number had been used in a totally different part of the country at a superstore - which bummed me out for two reasons: (1) someone stole and that's the worst and (2) they were in a fun part of the country that I totally want to visit! The good news is that our bank is awesome and reimbursed us so really, no harm, no foul. Except how about we all just agree that stealing is wrong and we'll stop doing it?

Then randomly the next night, I woke up with a crazy high fever and spent the next 12 hours fighting spikes in my insane body temperature. However, perhaps it should worry all of us that I'm a parent in charge of knowing stuff because, as it turns out, I had the fever earlier that evening when CB and I were watching tv on the couch. But instead of accurately reading my body's signs, I was like "Wow, I must've worked out extra hard today because my entire body hurts! Like, uncomfortably aches!" And I was really proud of myself and rewarded that behavior with leftover birthday cake. As you do when you're a grownup.

And then this morning I found myself in a very minor car accident - I say "very minor" because (a) it wasn't my car and (b) nobody was injured. But it was probably less minor for the people who had to deal with insurance and headaches and telling their boss that they crashed the company car.

However, speaking of reading the situation wrong, I decided to still go to work because, you know, this week is trying to subtly tell me that it'd be awesome and nobody at work would yell at me! But this week was wrong. And so now I'm pretty sure I should just sit really still and not talk to/do anything until Sunday because the week needs some time away from me so it can cool off and we can both think about how we feel about everything that's happened and rebuild.

To be totally honest, though, I keep feeling like I should thank the week because all of this stuff really is minor and I'm grateful that these are my "problems." And then CB is like "It's ok to be annoyed with this week" but my theory about magical thinking keeps me from putting those vibes out into the universe because YOU NEVER KNOW, you guys.

Also, sometimes these are the conversations that make CB wonder how someone hadn't already totally fallen in love with me and taken me off the hot market by the time he came around. It's called luck, CB. You're welcome.

Oh, and if you just can't get enough of what I have to say today (#everyone), head on over to my latest article on Romper! Apparently when people pay me to write I get super-serious!

To put us all in a better mood, let's revisit the magic that is being a kid and check out this little guy being TOTALLY BLOWN AWAY by automatic doors.