This week's book is "To Conquer the Air" by James Tobin. This works in nicely with what CB is reading right now, David McCullough's biography on The Wright Brothers. So, this book review sounds right up his ally - yay air travel! (boo current air travel). Click here to check it out and then browse around for other non-air travel recommendations! (thanks, dad!)

YOU GUYS. Ok, so it's not news to anyone who has spent about three minutes on this blog that I get annoyed by random things. However, I'm going to make a guess that what I'm about to tell you will TOTALLY ANNOY YOU TOO. 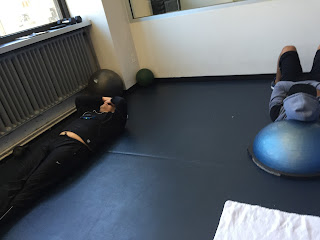 What is that, you say? Oh nothing, just people working out at the gym. Wait, I'm sorry, no it's not. It's people NAPPING AT THE GYM. And so I took their picture because I was trying to shame them into getting up, which didn't work, surprisingly. So I put my towel (pictured above) as close to Sleeping Man #2, brought out my phone, took this picture, and then texted it to CB. 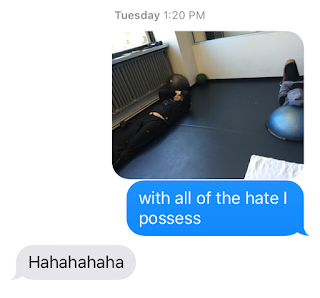 If you're using deductive reasoning skills, you'll deduce that CB knew what I was talking about because it's possible I've brought this up several times at dinner. BECAUSE I CANNOT DEAL. The guy in the grey hooded sweatshirt does this approximately twice a week. He uses workout equipment TO NAP ON. Yes, I'm yelling.

But the guy next to him was new! Um, you guys, the mats aren't like in kindergarten, they're NOT FOR NAPPING (still yelling).

So then I do something that maybe says more about my weird psyche than their extreme laziness - I'm compelled to work out harder. Why? I don't know, maybe to guilt them into feeling bad? But as my co-worker said (oh, um, it's possible I brought it up at work, too) "If they're the type of people who sleep at the gym out in the open like that, they're not the people who are going to feel guilty if you're working out really hard right next to them."

Which makes sense. But I still can't stop. To the point that I think I maybe pulled a calf muscle? TOTALLY NORMAL. (yelling will commence.)

And now, the Video of the Week! Happy Friday, everyone!