*I usually don’t get “political” on here because, well, that’s no fun! But I’m making this one exception. Our regularly scheduled program will be back in the next post!*

That time about a month ago when I got asked by a client if I let my husband dominate at home. And then nearly everyone I re-told that story to asked “Well, how old is that guy?” in order to assure me that if he’d been younger, he wouldn’t have said that out loud because he’d know better.

Or the time I got propositioned by an executive several levels above me at my previous job in front of a number of other employees at a holiday party. He wanted to know where I lived and what train we could take back to my apartment. He was married with children and this was the first and only conversation I ever had with him…until the next morning when I had the uncomfortable experience of being in the company elevator alone with him when he bluntly told me that last night was “no big deal, right?” And he should know, since he had been party to a worst-kept-secret affair with one of his employees the previous year that was eventually ended and saw the female employee in the equation moved out of his department and into another one so as not to “make waves.”

The “me too” phenomenon is going rampant on Facebook right now, but let’s get real, it’ll end in a few days and nothing will have changed. Why? Because, um…..did you read those stories? I’m one person. Those are three of, like, literally dozens, if not more. And I’m one of the “lucky” ones! I’ve never been groped or assaulted, I’ve never lost a job or had my reputation questioned because of any of it. I’ve felt embarrassed, I’ve felt mild anger, I’ve felt…confused. But that’s it. AND THAT’S A GOOD OUTCOME, you guys.

I have not one man in my life who I think has ever or would ever do anything remotely similar to those stories above, let alone assault a woman. I do not think that men are evil or bad or just will never learn. I’m surrounded by some of the best examples of true men that any person could hope for, both in my personal and professional life, and my daughters are being raised by the kindest, most respectful man I’ve ever met.

At the same time, men – CB included - have no idea what a day in the life of a “privileged” woman is like. Re-read my little anecdotes again. Those are NON-stories. They didn’t even register beyond discomfort or embarrassment or just shrugging it off as some old guy who doesn’t know better, some young guy who’s gross, or some powerful guy who does this all the time.

“Me too” won’t change anything until we change. I never once said anything to any of those men, or the others who have said gross and inappropriate things to me over the years for a multitude of reasons. But mainly? I didn’t want to make things worse. I didn’t want to offend them, God forbid,  and I certainly didn't want to be seen as difficult.


Can you imagine? Now that would be awful. 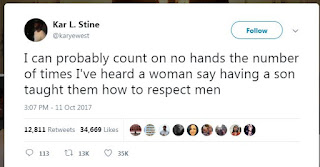