You never want to get a call from your child’s daycare. It’s never, like, just to chat because they’ve missed hearing about all of your quirky little life mishaps and they needed a break in their day. No, no, it’s because your kid is sick, or injured, or crying uncontrollably and this has never happened before and so, can we have someone walk her home, please?  All of these calls have happened multiple times to me over the course of three years with two babies in daycare. It’s inevitable and the reason why I have PTSD-type panic-sweats when my phone rings during the day. However, I’ll take those ANY day over this call. The call you never want to get. The call that literally makes you itchy. The call that reduces you to having conversations with your husband about how you will always be the puke and poop parent and wear that badge loud and proud, but he has to be this parent. He just has to, there’s no choice, you’ve already decided.

It's The Lice Call.

When I got the call that they’d found “evidence of lice” in the tangled web of curls that belongs to our three year old, I instantly felt itchy. I think I also said “Ew” more than once to the director of the daycare, which I’m sure she found really reassuring. Then, of course, I immediately called my husband and was like “I’m leaving work to go get the kids but also you have to leave work to go get the kids because I’ve decided you’re the lice parent by virtue of the fact that I’m feeling light-headed even thinking about picking live bugs or clear eggs out of my first-born’s hair and now I have to go die.” Since he knows who he married, he was like “Roger that” and picked the kids up while I spent 20 minutes in a Walgreens on the phone with my sister as she talked through the process and I propped myself up against the wall while searching for a lice comb and bleach for everything.

However, my sister - while being comforting and informative, also clearly got a sick joy out of my pain - because she used the phrase “Super Lice” more than once in a 20 minute phone call. Cuz big sisters are the worst.

This text exchange also happened with her: 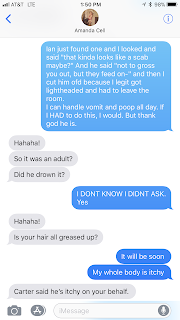 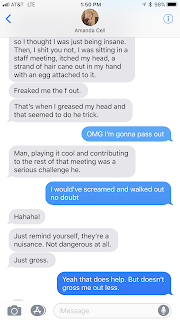 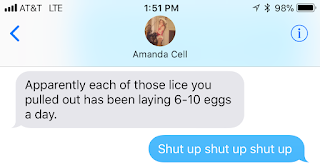 The good news is that it only took four treatments of Vaseline and Saran Wrap, one call to a pediatrician, one over-the-counter Lice remedy, two lice combs, and a $350 visit to a special kid’s salon that specializes in guaranteeing Lice-Be-Gone (that’s not what they called it, but it’s what they should’ve called it). Plus, my and CB’s sanity, any sense of dignity I had left, and a lot of bleach-based laundry detergent and she was totally rid of it 24 hours later! See? Easy Peezy. We are NAILING this parenting thing.

Thank God our little one didn’t get it and that our oldest is a true champion and was like “I’m still kinda itchy, do we need to wrap my head again?” and we were like “Yep” and she just sat and watched “Trolls” while we valiantly picked those little f**kers out of her head. And I’ve gotta say, parenting is nothing if not an evolutionary process because, while I started out our journey as the squeamish, unhelpful parent during The Day the Lice Struck, CB expressed both his amazement and disgust at how quickly I went from not being able to talk about it to sitting over my daughter while she diligently sat still and I dug into those tangled curls with the fierceness of a mama chimp. At one point, CB described witnessing me dip the lice comb into vinegar water (thanks, Google and my sister) in between bouts of going through every section of her hair and saw some vinegar water and Vaseline flick onto my face as I quickly brushed it away and dug back in to kill those GD lice mf’ers (those last few words may have been my editorializing.) I’m guessing it was a moment in his life where he really took stock of the mistakes he’s made in his past and felt like this pretty much made sense as a punishment and so, ok.

Sidebar: we need to have a vow renewal ceremony, Real Housewives style, because I need to include the phrase “I vow to try really hard not to tell you to chew quieter any time you chew anything from now on because I now know what true love is after you looked for lice on my Vaseline head and still kissed me without irony.”

However, because life is cruel and hilarious, The Great Lice Killing also occurred within the same day as getting our offer accepted on a house we fell in love with and figured we’d never get. Which led to this picture:

Obviously this will be prominently hung on the wall of our new home because of course our first-time homebuying experience should also include a picture of champagne and a shower cap to suffocate any potential lice you might have on your head (thankfully, I was clean.)

It’s what I call balance, you guys.