And I may or may not have eaten my keys while trying to shove my Trapper Keeper into my purse.

So today somebody called me old while thinking they were complimenting me. It was a weird moment that made us all feel awkward until  I started mumbling about Caboodles and Garbage Pail Kids and then changed the subject so we could talk about eating pennies and keys.

It hasn’t been a normal morning. 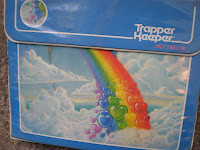 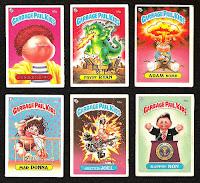 But the weird part is that the conversation started out with my confident declaration that Trapper Keepers were making a comeback and I was feeling pretty good about the fact that I got in on the ground floor of that invention back in the 80s. Obviously.

But then some child who snuck into the office and started pretend-working said “What’s a Trapper Keeper?” And then the world gasped and he was shunned.

OR, three other people then looked at me and asked me the same thing and so I tried to shame them with my knowledge of loose-leaf binders with Velcro closures and awesome cats or tv shows on them.

Child: Wow, you went to school in the 80s? I thought you were my age. You don’t look that old!

And then I gave him a half-smile while trying to murder him with my eyes.

However, after that enriching moment, I decided that perhaps I needed to start re-thinking my conversational skills because, while shock and/or confusion overcome many who have decided to converse with me about pretty much anything, I’m starting to notice a pattern of behavior on my part where I think that my thoughts and actions are totally normal. And then I say them out loud. And then I am wrong.

A good example of this is a chat I had with CB and Cousin Nikki recently where I talked about eating keys.

After our “fun”adventure to Soul Cycle this weekend, some people grabbed healthy wheatgrass or kale or tumbleweed shakes to re-fuel. I, however, decided to save room for a burger and fries later because I obviously know what my body needs to work at its peak performance level.

Anyway, on the train ride home, Cousin Nikki was talking about how the wheatgrass shots tasted like grass clippings.

Me: Sort of like how everyone knows what their keys taste like.
Cousin Nikki and CB stare at each other.
Me: I mean, not like you’ve actually eaten your keys, but you totally know what keys taste like if you eat a mint that’s been at the bottom of your purse, and when you put it in your mouth you’re like ‘Huh, this kind of tastes like my keys.’
Cousin Nikki: Um, people don’t do that.
CB: You eat your keys?
Me: No! But wait! Ok, so you know how you just sort of know what pennies taste like? Well that’s what your keys taste like. It’s basically the same thing.
CB: Wait, why are you eating pennies?
Cousin Nikki, to CB: Um, your girlfriend fully eats keys and pennies. We might want to re-think this whole thing.
Me: I don’t eat keys and pennies, just mints that taste like keys and pennies. Also, you guys eat grass!
Cousin Nikki: But everyone has eaten grass!
Me: I totally took your side on that! I can’t believe you haven’t eaten key mints before.
CB: Please stop talking.

Whatever. This is one of those times that I’m going to take a change and put it out there because that’s how I roll. And there’s a not-so-small part of me that thinks that the lovely, devoted readers of this blog will back me up on this one. So c’mon, people, key mints! Who’s with me?

Publishing note: While I typically don’t post on Thursday’s, tomorrow will be an exception. However, it will not be written by me, lovely readers, but rather by a guest blogger who has a slightly different take on the SoulCycle post from earlier this week. So, tune in tomorrow for my first ever GUEST BLOGGER!
Posted by Becky at 10:36 AM