So, this year CB and I have had a hard time getting into the holiday spirit. Between crazy schedules and flying to Mexico the week after Thanksgiving, we sort of found ourselves at a point where it'd be way too much work to buy a tree, set it up, and then quickly stare at it for 6 days before leaving to visit my parents over Christmas.

And while I'd come to terms with this, CB had not. And subtlety is not his greatest strength.

CB: "It doesn't even feel like Christmas."
CB: "I can't believe Christmas is so soon. I walk into the apartment and it feels like any other time of the year."
CB: "I hope I can get into the Christmas spirit sometime soon."


And so, since I took a vow a few months ago to love and honor him, even when I'm tired and don't feel like hanging up Christmas decorations, I decided to surprise CB with a Christmas Extravaganza. Which basically meant that he was out of the house for a few hours yesterday and I strung lights over our potted plant, bought a nutcracker and a wreath, and tried to make the apartment sparkle so CB would feel more Christmas-y and I could go back to napping. Like any good wife would. 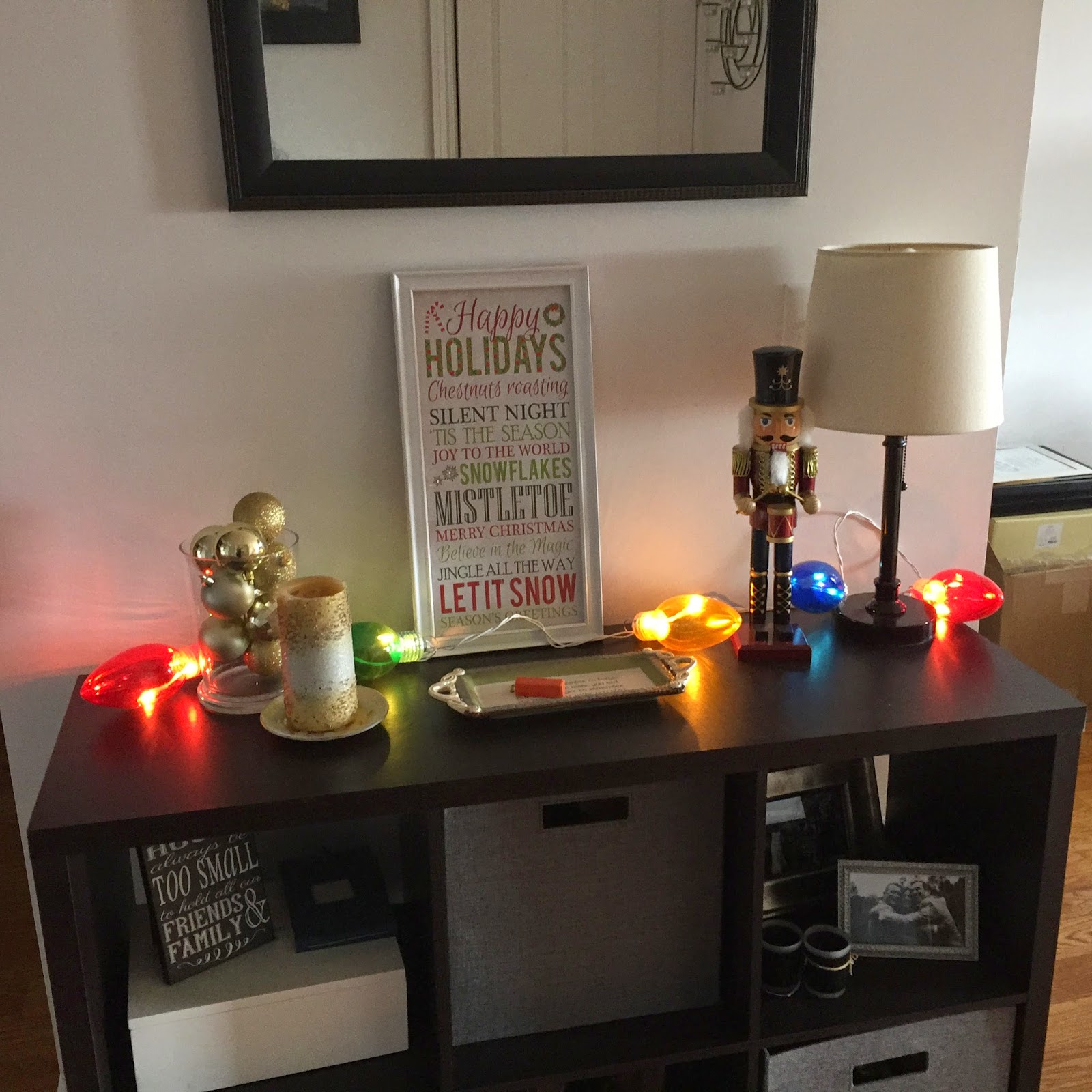 And as an added bonus, below is my post from last season when I graded the health of our relationship based upon how we made it through the Christmas-decorating process. As any healthy person would.


This weekend, CB and I went Christmas tree shopping and got into the holiday spirit by allowing glitter and lights and jingle bells to throw up all over our apartment. It was magical.

However, there were several moments throughout the weekend where I realized that, when it really comes down to it, we can all pretty much get an inside look at the health status of the relationship based upon whether or not you break up over decorating your home. I mean, it’s not a completely scientific study or anything, but I’m pretty sure it’d hold up in peer review.

While shopping for our Christmas tree, I got to the lot a few minutes early and had a chance to walk around and check out our options. I immediately gravitated towards a perfectly plump tree towards the back that I just knew would be a perfect fit. I also named him “Plumpy” and then told Carlos, the tree lot manager, that I had to wait to see if my other half was on board. He was like “From the looks of things, you’re bringing this tree home whether he likes it or not. You named it.”

Um, excuse me Carlos¸ but I’m a team player and can totally let Plumpy go if CB finds one he loves. I name everything. (Have you met our toaster, Poppy, and our Pigeon that left three weeks ago, Harold?)

Also, this is why CB should really just not take me to do things like this because I get attached to inanimate objects quite quickly and project feelings onto them that perhaps the dead pine isn’t experiencing. But you don’t know that, so let’s just be on the safe side and assume Plumpy understood me when I promised him I wouldn’t leave him alone in the lot that day.

Anyway, after 30 minutes of CB looking at every tree except Plumpy, he circled back.

CB: “I think it’s a great tree, I’m just not sure if it’s tall enough.”
Me: “He’s perfect.”
CB: “It’s a he?”
Me: “Yes. This is Plumpy. But I mean, if you see something else you like, I’m totally open to that. This is a joint decision.” (or the conversation went something like that)
CB: “Jeez, you already named it….”
Carlos: “Sorry, man, you’re definitely going home with this tree.”
CB: “Yeah, that’s becoming pretty clear.”
Me: “No! I’m totally flexible! Which one do you like?”
CB, looking around: “Well…..”
Me, whispering to Plumpy: “Don’t worry, we’ll be right back.”

Cut to 15 minutes later when Carlos was tying Plumpy to the top of the car.

Health Grade: B+ (we get points knocked off for my mental health clearly not being top notch, but the plus is because at one point I was like “Sure, we can take this other tree I haven’t named.” But then CB realized it wasn’t plump enough and I secretly did a dance of joy over my ability to be compromising AND still winning. If this was a contest, which obviously it’s not.)

While Carlos and CB were getting the tree secured on the roof, I started looking at the dozens of wreath options they had on display. As we all know, my affinity for glitter is strong and proud. However, when presented with a wreath that was literally covered in glitter ribbons, glitter fake fruit, and a bird with a glitter bowtie (festive!), I looked around at the other more classic wreaths and said “You know what? This is overkill. Also, I live with a man who puts up with a lot. So let’s go with the wreath that just has a splash of sparkle and make everyone happy.

Health Grade:  A. This was a growing moment.

While getting the tree in place, CB needed my help making sure it was straight. Now, I’m not sure how many of you have done this with just two people, but it’s quite hard to be sure it’s straight when you’re holding the thing up while your partner is screwing it into the tree stand in what appears to be an upright, not-at-all-leaning fashion from the ground position.

But then when you back up you’re like “Ooooh, it’s leaning to the right.” And so he gets back down on the ground, moves it “Just a half an inch or so to the left” and then you stand back again. “Yeah, it’s leaning too far forward now.”

Cut to 25 minutes later when CB started to have an allergic reaction to the pine and was like “Really? Are you sure you’re not just leaning to the left?” and he made the face he makes when I can tell he’s holding in frustration specifically directed at me.

To which I saved our pending marriage by calling our friend Matt, who lives down the hall, to come hold the tree while CB adjusted it and I stood back making sure it was straight. Also, Matt kept agreeing with CB, which makes CB not feel so alone in this world.

Matt: “It looks really straight to me.”
Me: “You don’t think it’s leaning a little to the left?”
Matt, taking it from another angle: “Well maybe a little, but when it falls a bit it’ll even out.”
Me: “I’m not sure……”
CB: “Alright, I’ll move it a little to the right.”

Cut to: 5 minutes later when Matt and I were like “Yeah, it was better the way it was before.”

And then CB tried to take the ring off of my finger but I am quicker than him in the morningtime.

Health Grade: B- (CB is very patient and I have a good eye for design so the time and energy spent making sure was well worth it – and I’m pretty sure that’s a unified position we both mentally took while never having to say it out loud. However, I probably could’ve listened to him about 15 minutes sooner than I did, and so there’s some work to do in the next few decades.)