So I was making a pb&j for CB yesterday and, as I handed it to him, we had this conversation:

Me: “Do you kiss your sandwiches?”
CB, staring at me.
Me (walking away): “No, nevermind, nobody does that, nevermind….”
CB, laughing: “Oh God this is gonna be good. Do I kiss my sandwiches? Do you?”
Me: “No, not, like, kiss your sandwiches. But, like, the bread.”
CB: “Do I kiss the bread?!”
Me: “Yeah, when you put the two pieces together.”
CB: “I don’t even know how we’re possibly having this conversation. So you kiss each piece of bread?”
Me: “No, not actual kisses, I just make a kissing sound when I put them together, like the pieces of bread are kissing. But I don’t kiss the bread itself.”
CB: “Right, cuz that would be a lot weirder than what you’re describing.”
Me: “Nevermind.”
CB, laughing: “I just love that you could even picture me making a kissing noise with my bread when I make a sandwich.”
Me: “I just wasn’t sure if it was a thing or a me thing.”
CB: “It’s definitely a you thing. Most of the things in your life are you things, fyi.”

So last week I was walking down the street and starting thinking about a song that drives me crazy every time I hear it. Except I couldn’t think of the song. Which started driving me even crazier. And so I texted CB. 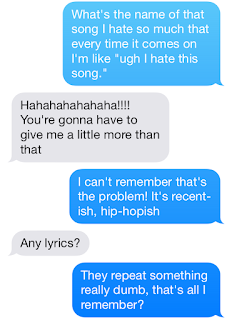 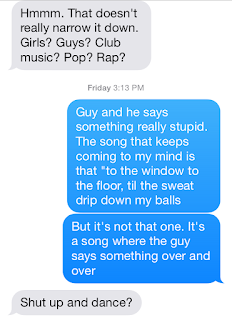 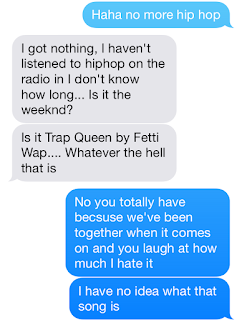 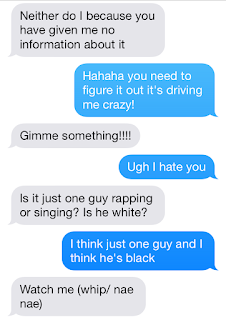 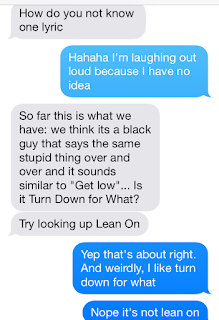 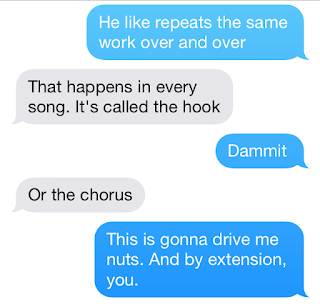 And then the conversation continued later that evening.

Me: “Ok, so we have to have a serious conversation about us figuring out what song I hate.”
CB: “Ok…but I don’t know if that falls into the category of ‘serious conversation.’”
Me: “You need to help me because I’m going crazy.”
CB: “You’ve literally told me nothing. How can you not know ONE lyric or a melody?”
Me: “I don’t know. But the worst part is going to be when we both hear it and then can’t get it out of our heads. It’s awful.”
CB: “I don’t think this song exists.”
Me: “It DOES exist! I can’t believe it’s not immediately coming to you, this is so annoying! I complain about it every time it comes on.”
CB: “Yes, you’re the one who should be annoyed in this scenario.”
Me, laughing: “I know….but I need you to help me. I won’t sleep otherwise.”
CB: “When did it come out, do you know that?”
Me: “I think this year? Or last year.”
CB: “Ok, so we’ll search popular songs from 2014 and 2015.”

Fast forward through 15 minutes of us googling Billboard Top 100 hits from the last two years.

Me: “Now that I’m looking at the songs that were top hits in 2014 I’m feeling like maybe it’s been out longer? And most of these songs I’ve never heard of.”
CB: “This is going really well.”
Me, reading off the list of 100 songs from this year: “I’ve not heard of half of these people. ‘Silento…..A$AP Rocky…Fetty Wap….”
CB: “You know Fetty Wap. He’s the guy with one eye I showed you a few weeks ago.”
Me: “Oh, right. But I couldn’t pick him out of a lineup. Or any of his songs.”
CB: “The safe bet, in the lineup scenario, would be to pick the guy with only one eye.”
Me: “You knew what I meant.”

And then he did.

Sadly, we still haven’t figured out what song I hate. But now I can’t stop singing about whipping a nae nae. Problem multiplied.

However, I did come into work today and he'd emailed me this without any text. So, you know, it's why I married him. 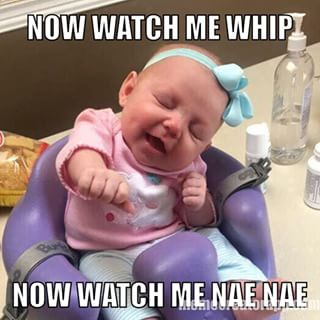