The other day I got copied on an email from a co-worker who was emailing our building admin to tell her that there was a “very strong smell of gas.” Apparently, everyone around me was getting the “very strong smell of gas” as well. And this turned out to be for good reason, as the building admin replied that they were using some sort of torch and laying tar on the roof and so that’s why everyone was smelling it.

So I emailed a co-worker/friend and said “bad sign that I didn’t notice?” and he wrote back “a bit.” But then I couldn’t tell if he was kidding because, no joke, I didn’t smell a thing. So I was like “no, seriously….are you still smelling it? Like, it’s currently happening as we type this?” And he confirmed that he was not joking, it currently smelled, and wtf is wrong with me?

Which then led to a rabbit-hole Google search that lasted nearly 30 minutes to figure out what I was dying from, other than gas-related brain death. 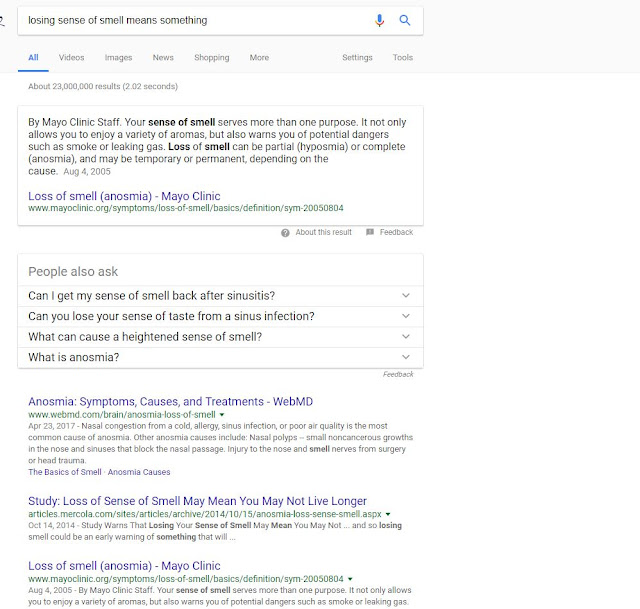 And we laugh, but this is concerning. Not because I’m dying of something and my lack of smell is the first sign. I mean, that might be it, but that doesn’t concern me. What does concern me is that I can literally be oblivious to the “strong smell of gas” that all other human beings around me are experiencing, yet I literally have to leave my desk with someone is eating loudly in my vicinity.

Other things I haven’t noticed in real life:

A giant crane that was outside of my work building for two years, that I walked underneath every single day, and didn’t notice until a co-worker casually mentioned it and I said the words “what crane?” and meant them.

A giant driving range along the side of a road I would run by on a weekly basis without noticing it until CB casually mentioned it one day and I said the words “what driving range?” and meant them.

A sliding glass door that my face met at full speed when I was in high school, so violently that my friends then put a giant, taped X on the glass so I wouldn’t do it again. Because that was a likely outcome. And I was not drinking.

A regular bedroom door that my face met at full speed when I was at a New Year’s Eve party a few years ago . Thankfully, only one very nice friend witnessed it as I tried to casually walk away as if it hadn’t happened. I was drinking.

Yet, if someone is eating a banana nearby, or using the wrong version of “there/their/they’re” in an email, or clicking their pen during a meeting, IT’S ALL I CAN HEAR/SEE. Which says something about me, though it’s unclear what that something is. Mainly, it tells me that my children should depend on their father for the big picture stuff but come to me if they want to know the best way to multi-task what you’re doing while counting the amount of times someone slurps their soup during lunch. Which is a skill, if you’re me, because otherwise you’d be unemployable because all you can do is focus on the fact that they’re the worst.