The other day I was talking to some co-workers about a time, years ago, when CB and I were just friends and one of them said “I just love the love story of the two of you.” And I laughed, because hearing your relationship described as a love story sounds odd unless you’re, like, a Disney character. Or Harry and Sally. But this week marks our three year wedding anniversary, and as I look back over these last three years, I can’t help but see the eight that came before it, bringing us to this place in time, looking at our two daughters giggling in hysterics on our bed over nothing in particular except how fun it is to be little.

And what I see over these last eleven years is a man I met at the tender age of 28, who shook my hand and welcomed me to the very first day of work at my new job. We sat next to each other and shared a cubicle wall, and what CB didn’t realize was that the simple act of being nearby meant that I’d talk to him about everything, endlessly, for the next several years (or the rest of his life…). He didn’t have to do too much responding, just the occasional nod/interjection to let me know that he was still awake/sitting there. And that suited us both just fine, as it turned out. But over the course of the first year of working together, I chipped away at his determination to keep his personal life and professional life separate and private. He shared with me, once, that he didn’t like making a big deal out of his birthday, and certainly not at work. And so of course I figured out when his birthday was and made sure to put balloons on his chair, complete with a card and a cupcake so that he felt celebrated and important. It was clear to me early on that he didn’t really know what was good for him and just needed his world expanded a bit – in the form of balloons and sugar, mostly.

Then, about a year and a half into working together, a relationship I’d been in for years ended painfully. I wasn’t keen to talk about it much, which made CB the perfect person to tell. So on a Monday morning in September, I walked over to his desk and whispered – a first for our relationship – and filled him in that it was over. As I started to walk away, he stood up and said: “C’mon, let’s go to that milkshake place I told you about. I know you can drink a milkshake at 9am, that’s right up your alley.” And so we went. And it never came up again, unless I wanted it to. He never asked me for any of the sordid details – the only person in my life able to make that claim -  though over the years I provided them here and there. Which was one of the first signs to me that this guy was different. And trustworthy. And seriously knew how to make me feel better in times of need!

So it should go without saying that we were soon more than just co-workers and running buddies, we were friends. He mistakenly introduced me to a large portion of his family/friend circle on his 30th birthday at happy hour one night, and as he says, “that was the beginning of the end.” While everyone else assumed we were into each other, we were very clear that we were not. However, true to form, they ignored us both and insisted we should just give up the charade and fall in love already. Which we promptly did about five years later, thankyouverymuch.

And when we did, there was no turning back. This thing that wasn’t a thing, then became a thing, now sees us as parents to a 2-year-old and a 7-month-old. It’s seen us spend the last three years excitedly awaiting our first daughter. And getting hit with the shock of new parenthood and total exhaustion. Figuring out how to fight and forgive, and learning that one of us needs to be well-slept at all times for the two of us to balance life without a knife-fight. It has seen us excitedly awaiting our second daughter, while figuring out how on earth we’re going to have two babies with two different sets of needs. It’s seen us having zero idea what two kids under two was going to feel like, but mainly just relishing in the fact that all four of us get out the door each day with our clothes right-side out most of the time.

It’s seen us poorly navigating the Hong Kong airport, giving life to the now commonly-used phrase “We would for sure be the first couple kicked off of the Amazing Race.” It’s seen us forgetting to say hi to each other and then remembering how important that is each day. It’s seen us sleeping on the floor of the living room together as each of our girls enjoyed their own room during sleep-training.  It’s seen us doing the Parent Zombie Shuffle through our mornings, packing diaper bags and refilling diaper bins and cleaning up literal spilled milk and sticky, syrup-y tables. It’s seen us laughing through almost every experience we’ve had, and crying when it was needed. It’s seen for-real fear in our eyes during pregnancy and childbirth, and for-real relief at their end. It’s seen us collapsing onto the couch at 7:30 each night after we’ve put both kids to bed, the house quiet, and our will to cook anything other than a salad at an all-time low. It sees us talking about an episode of “El Chapo” that one of us couldn’t get through because it’s an hour of reading television and that totally defeats the purpose, you guys. But since it’s such a good show, I depend on CB to stay up until 8:30pm and read it all so he can fill me in on what happened after El Chapo crossed over the border to El Salvador because it was just about to get crazy! It sees us realizing that I’m “The Throw Up Parent” because the other parent in the equation starts to dramatically gag and potentially vomit when he sees, hears, or smells it. It sees us still laughing at his cheesy puns and my ridiculous sports observations and knowing each other’s “look” for everything from “I know, right? This person is ridiculous,” to “I know, right? I can tell you definitely want to scratch my head while we watch ‘Flipping Out’ right now, so let’s do this!”

And it sees us having no idea what we were in for when we said our vows and laughing that we ever thought we had a clue. Because while sleeping on the floor of your living room and cleaning up vomit does not make for great wedding vows, as it turns out, it does make for a pretty great life. And our vows still hold true…except for the one where he promised never to leave his dishes next to or in the sink when the dishwasher was empty. But overall, they’re still going strong! 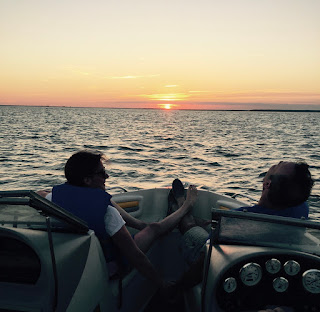