On why you should never consider me a real adult and why technology is dumb.

I think I’m only marginally qualified to be considered an adult. And, if I’m being honest, it’s sort of a complete miracle that I haven’t gotten murdered. Or died from natural causes related to eating peanut butter out of the jar. Or from getting trapped inside my apartment. Or by getting killed while waiting to get back into the apartment I locked myself out of.

Basically what I’m saying is that it’s a miracle that I don’t currently reside in an assisted living facility with a medic alert bracelet around each wrist and the title of “Really Awesome Puzzler” given to me by the staff because of my skilz during the recreational hour.

You see, it occasionally occurs to me that some basic adult-like behavior doesn’t come naturally. Like, you know how some people are just really good at doing crafts and stuff to the point that you kind of secretly hate them for being able to create a beautiful centerpiece and personalized name plates for everyone in attendance using a piece of string and a Cheez-it? Well, let’s get real, if that were me I’d just ball the string up in the middle of the table after staring at it for 10 minutes and then eat the Cheez-it and make everyone sit on the floor.

Also, when I say “it occurs to me” I mean that it repeatedly gets mentioned by friends and family during nearly every interaction we have that perhaps I haven’t quite mastered this adulthood thing.

Example #1: While chatting with my girlfriends over lunch this weekend, I was re-telling the really awesome “borrowed vegetable oil from a neighbor” story. However, they realized during the re-tell that, unlike a normal person, I didn’t show up at the neighbor’s door with any sort of container to carry the vegetable oil in. Not a measuring cup or a plastic cup. I simply showed up with two hands and a smile, not even thinking ahead as to how I’d get said oil down the hallway.

Friend: Wait, you didn’t bring your own cup?
Me: No, she just gave me a plastic cup of oil.
Friend, laughing: So you just showed up and, what, stuck out your hands and said ‘just pour it right in here’?
Me, laughing: It literally didn’t occur to me until just this moment now that it’s weird that I showed up asking for oil without anything to carry it in. (pause) Do you think she thought I was a weirdo?
All three friends in unison: Yes.

Example #2: While chatting with CB the other night, I got up and went into the kitchen to get a snack. But since he’s not a snacker, he doesn’t really have snacks at his place, and for that, I think he must hate America. However, we did have a tub of Cool Whip that I bought a week ago when we had brownies (thanks to the borrowed vegetable oil), and so I took out a spoon and scooped some into my mouth while he was talking.

CB: Um, what the hell are you doing?
Me: Eating cool whip. I’m craving something sweet and we don’t have any chocolate.
CB: That’s disgusting.
Me: It’s super low-cal!
CB: What are the ingredients in it?
Me: Water……
CB: Uh huh….
Me: ….sugar….high fructose corn syrup…..
CB: Yeah, you’re basically just eating water and sugar.
Me: And you’re point? It’s only 15 calories a serving! Which I’m not even eating. So it’s like I’m eating air.
CB: Please turn around while you eat that, I can’t watch.
Me, turning around and grumbling: You’re not the boss of me…..

Example #3: Sometimes I’m like a child when it comes to understanding how things work. Except for most children understand how to do things like FaceTime and Skype because they are surrounded by technology at all times and never once had to walk eight miles to school in the snow with no shoes.

Anyway, in my defense, I totally pull off technology all the time. Uh, I have a blog, people. Obviously. But when technology doesn’t work the way I expect it to, I sort of have a brain shut-down and just start randomly turning things off and back on and furiously hitting various buttons so that everything flashes at me at once and then makes a sound and stops working completely.

But because I’m an awesome aunt, I attempted to FaceTime with my sister and niece for her birthday yesterday.

Fact: I have successfully FaceTime’d before and can sometimes even do it on the first try.

Fact: I have never successfully Skyped because it doesn’t make any kind of sense and you really shouldn’t make complicated software like that, computer people.

Fact: While attempting to FaceTime yesterday, my niece mastered a level of a new video game she’d never played before and my sister successfully made an entire meal while waiting for me to figure out how to use my phone.

Anyway, this is what happened 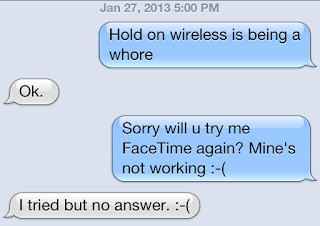 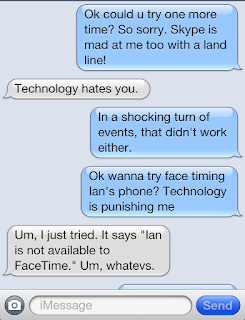 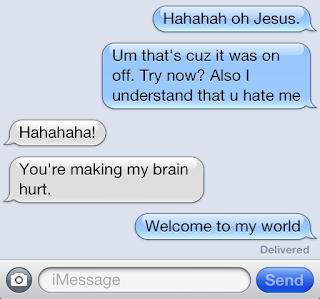 Ok, so really the moral here is pretty glaringly obvious, is it not? Would I like to be a normal, functioning member of society who remembers to bring cups in which to carry things, doesn’t eat sugar water from a bowl, and understands how the shiny, bright object I spent $100 on works? Of course I would, yes. Am I grateful that I have friends and family around me to steer me in the right direction when I’m about to leave the apartment with no pants on to take out my trash? Debatable.

Happy Monday, everyone!
Posted by Becky at 10:49 AM