And then I almost died in a Tori Spelling made for tv movie.

So I totally learned some important lessons about myself over these last few days when Sandy decided to be a big ole' b-word on the East Coast. Not the least of which was "put your pants on and don't eat so much candy corn."

Ok. So I did all of the pre-hurricane prep that they tell you about: fill your tub with water, have lots of extra jugs of water on hand, get non-perishable food to last 3-5 days, and charge your phones. I'm sure there are one or two more things on the checklist, but whatever, that's the gist. And so I did all of that and was feeling very good about my adult-like preparation. Meanwhile, almost every single friend I have, and a few acquaintances, checked in to make sure I'd, you know, heard that there was a storm coming.

Uh, guys, I've totally got this.

Fast forward to: 11 minutes after my power went out and I was like "Yeah, I'm done with this. Let's cut the crap and bring the power back because I'm bored." Which then lead to me panic-eating the leftover candy corn in my purse from the weekend. Guys, don't judge me, it was stressful! But as I eased into the notion that I may be without power for a while - which was a good notion to come to grips with because, uh, looks like it'll be about another week before we get it back - I decided to totally go all Little House on the Prairie on this storm and light some candles, cozy up to my cat, and re-read some of my favorite books.

Everything was going swimmingly, and I was ignoring the fact that the tree outside was going to come crashing through my bay window, and focused on the positive: I had enough food, water, and battery power on my two phones to make it for quite a while. Also, I had a Tylenol PM that I decided would get me through at least 6-7 hours, so popped that right down, blew out the candles, and tried to relax. Something, by the way, I don't always excel at.

However, just as I began dozing off to the sounds of over-served jerk faces yelling "Bring it Sandy" in the middle of the street at midnight, I heard a knock on my door.

Enter: Me being the first person killed in a B-rate horror movie from the 70s.

I walked over to the door, pants in hand, and had this really lovely encounter:

Me: Who is it?
Murderer: It's PSE&G
Me, potentially peeing my pants: Uh....you're from PSE&G?
Murderer: Yes, can you open the door?

And then I slowly backed away from the door as the blood drained from my body and I realized that I was about to be hurricane-slayed. So, being the prepared adult that I am, I ran into my bedroom, grabbed the baseball bat that CB bought me for safety years ago, the mace my dad bought me (the legal kind?? It's pink, whatever, it's awesome), and sat on my bed as silent tears began going down my face. Also, Oliver was zero help as he realized that this might not end well and so he sought shelter under the bed. Thanks a lot, guy.

However, since I'm not typing this from my ghostly grave, you obviously know that I came out the winner in this movie. And, sorry to not give you some sort of great ending to that climactic knock on the door, but I think the guy was too drunk or bored or bad at killing to try too hard to get into my house. Also, maybe he actually was from PSE&G, but my money's on the fact that that's total b.s. and I almost became a Sally casualty.

But because the universe wanted to make sure that I wasn't going to sleep at all, and instead just be super groggy and confused on Tylenol PM all night, soon after the killer knock, a random alarm in my apartment started going off and it took me far too long to figure out what and where it was. Also, as I searched for the blaring alarm in my 500 square foot, pitch black apartment, I created a scenario in my mind about the PSE&G killer somehow getting into my house from the fire escape, setting off an alarm to lure me into the blackness of my kitchen, and then killing me while wearing a Freddie mask or something. It wasn't pretty.

But again, totally going to let you down again from a climactic alarm, it ended up just being a random cable alarm (what? Yeah, I didn't know that existed either) and I held down the button, stood there until I stopped shaking, and then went back to my bed and put on some pants. Dude, it was only a matter of time, I figured, before I'd have to flee my building for some terrifying yet benign reason and then I'd be all over the news as the pants-less crazy person who didn't make any sense because she was drugged and covered in cat hair. 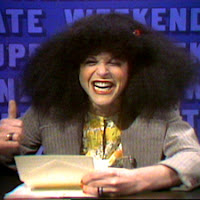 So, that was the first 5 hours of my Sandy experience, and let me tell you, it didn't get prettier from there. All it takes is no blow dryer and a diet of condensed soup that I failed to add water to for two days, and you have yourself a picture of a fully functioning 34 year old with Roseanne Roseannadanna hair and scurvy.