How Do YOU Shower? I MUST KNOW.

Second: Last night, CB and I were watching a movie when, halfway through, there was a shower scene. But not, like, a steamy shower scene that’s NSFW. It was just a woman showering and I was all like “Weird that she’s showering that way.” And CB was like “Um, what way?” and then my mind was blown when I found out that, not only do CB and I shower totally differently, but that maybe the way I shower is kind of weird.

Obviously I immediately paused the movie and was like “Follow me into the bathroom. We’re going to mock-shower.” And he was completely on board because he married me so he knows that this kind of conversation is a regular part of the deal.

I stepped in, turned my back to the shower, and mimicked all of my not-facing-the-water-ever actions. He then stepped into the shower and showed me how he lets the water not only HIT HIS FACE, but that sometimes he just stands there letting the water run over his head and down his body. Like he’s being slowly water-boarded in his own bathroom.

Me: “Oh my God, how do you breathe?”
CB: “Uh, the water doesn’t make me stop breathing.”
Me: “Right, but don’t you have to hold your breath?”
CB: “For what?”
Me: “Because water is hitting your face!”
CB, laughing: “No…it’s not that much water.I'm not submerged.”
Me: “Also, you’d never be able to have your eyes open when you showered!”
CB, still laughing: “Why couldn’t I open my eyes?”
Me: “Because the water is hitting your eyes sometimes!”
CB: “Right but if there’s not soap in there, you can just open your eyes.”
Me: “I cannot open my eyes around water.”
CB: “You are the strangest person I’ve ever met.”
Me: “YOU are the strangest person I’ve ever met! I’m going to have to literally poll everybody I know about this first thing in the morning!”
CB: “I’d expect nothing less.”

And so I started with my family. 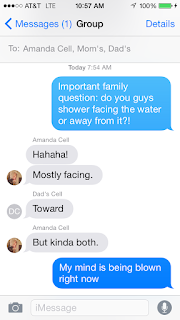 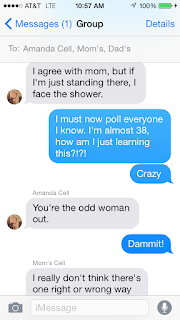 And then my dad chimed in that he agreed that there's no right or wrong way and it depends on the circumstances. But let's get real: there's a right and wrong way and I'm doing it wrong.

Except I can't stop! It took me TWICE as long to shower this morning because I was trying it the facing-the-water way and I just kept coughing on water and felt like someone was squiring a hose at my face and wouldn't stop.

Anyway…I’m taking a poll – facing the shower or away? I MUST KNOW WHAT EVERYONE DOES. Go!