Am I Repeating Myself? Whatever, I love love.

So this was a post from last year on this very day, but there's good reason. I love celebrating love, especially when it's people I can totally vouch for. Enjoy!


Forty-one two years ago today, two crazy kids who barely knew each other decided to take the biggest leap of faith around and said “I do” in front of their friends and families. They’d known each other mere months, were living in two separate parts of the country, and were about to embark on an adventure together to the Middle East where the woman was giving up her career and the life she knew to go be with some guy sporting a bitchin’ moustache and a sense of humor.

My mom is a quiet, kind, intelligent, sensitive, practical gal who was living in 1970s New York City and making it her oyster. She was a young nurse and, if I’m putting together the pieces of her stories correctly, not a stranger to the local pubs in her upper east side neighborhood. Yeah yeah, mom, I get it, you were living the Sex and the City dream before we even knew what that was. Also, if you ever tell me you were a Samantha, I will have to be in therapy for the rest of my life, so let’s just keep the past in the past, shall we?

Meanwhile, my dad is an out-going, funny, intelligent, kind, practical guy who was kicking it up at West Point, finishing up his senior year. I’m sure he was being all sorts of good and behaved and military-like, but also, I believe I’ve seen a picture of him that year on a tricycle with a beer in his hand. So, you know, I’m guessing there was some down time.

And these two crazy kids would never have met were it not for their two friends, who just happened to be dating each other and, I’m guessing, were tired of their respective third wheels tagging along every time they went to a midnight screening of “Love Story.” OR, they were like “Hey, you’re single, you’re single.  Let’s make a love match.” I mean, I’m basing that on my single days and the requirements for a pairing, so I’m using a little creative license with this part.

But one thing I don’t need to use my creativity for is knowing that, after that first weekend, my mom and dad didn’t spend too much more time apart from then on. They’d met their match. Boom. Let’s do this.


My dad often tells the story of how he knew my mom was the one when she didn’t kill him (or vice versa) during their “Death Valley” drive to…Texas? Ok, I can’t remember where they were driving to because I’ve heard the story so much by this point that I sometimes miss details here and there. But the gist is that my dad was impressed that this spunky red head he’d fallen for could actually make it through a horrendous drive through the deserts and not really complain, kind of go with the flow, and basically just be a champ about the whole thing.

Cut to: forty one two years later and sometimes my dad will tag along with my mom to the grocery store or something and she’s all like “Dave, seriously, go over there or something, you’re bugging me.”

You see, if you’ve been reading this blog for any length of time, you’ve figured out that I live in a world surrounded by romantic comedies, filled with ridiculously outlandish scenarios that bring two people, who seem to be complete opposites, together in the final minutes. But if you’ve met my parents, you start to understand that it’s because, growing up, I basically saw their marriage as a living, breathing organism of this possibility.

But, you know, without the awesome soundtracks and the good lighting.

And I think it taught me more than any Tom Hanks film ever could.

They taught me that love means compromise. It means laughter. It means saying ‘I’m wrong’ sometimes, and actually meaning it. It means forgiveness. It means communication. It means raising kids and being united even when you totally know I would be responsible with Nintendo if you’d just give in already. It means sacrifice. It means accountability to each other. It means patience. It means sometimes going to bed angry and then making breakfast for that person the next morning anyway. It means going on walks. It means watching “Homeland” together and reading excerpts to each other from books you think they might like. It means taking alone time. It means trusting the other person with your stuff, inside and out. It means loving them even when they don’t love themselves. It means playing Scattergories and having all of the same answers because you two for real have been together forever. It means talking about the weather and listening to the same stories over and over sometimes. It means ebbing and flowing and keeping it going. It means liking each other. It means having each others’ backs. It means commitment. It means giving them some Advil and a cold compress when they’re sick and not smothering them with a pillow because they’re really super annoying when they’re sick. It means watching your kids leave the nest and then finally going on fun vacations without them. It means going to bed at night and looking at that person and saying “Yeah, I’ll still keep ya’.” It means having your pal there every day.

It means forty-one two years together and still going strong.

Happy Anniversary, mom and dad. Thank you for teaching me how it’s done. 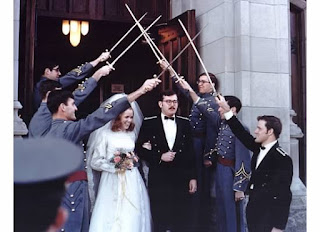